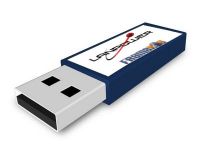 The GameKey Light compilation is a set of free open source games for Windows (free like in freedom) and "portables" which means playables without installation from a USB stick for example. Like the other LanPower compilations, each game also exist under Linux. This selection is "light" so, it can be unzipped on a 256Mo USB stick. Only few games are multilingual.

Version : This serie 2 is an upgrade of serie 1 and is fully compatible with Linux thanks to the Wine software (tested on Ubuntu 10.04 with Wine 1.1.42). Thus the LG Gamekey serie 2 is the first compilation of portable and free open source software games to be compatible with both Windows and Linux.

Use :
Unzip the archive in the chosen directory and disk and execute go.exe if it doesn’t launch automatically . Under Linux execute the launch.sh script.

It is a compilation under a GPL (Gnu Public Licence) licence and has been created with the help of Jeuxlibres.net, Framasoft, Wikipedia ,jesuislibre , the Bottin des jeux Linux and Framakey web sites as well as the official web sites of the concerned games.

a 3D game inspired by the TRON film (1982 Walt Disney) where each motorbike build a wall behind itself. The game of the film is based upon Blockade game (edited in 1976 by Gremlin) . The  association has participated to the translation in french.

FPS game that is particularly fast even on poor configurations. On LAN or on internet, Cube show its extent : the gameplay is very fast , and that make a very funny game. 3D accelerated graphic rendering necessary however.

FloboPuyo is a clone of the famous PuyoPuyo, that is to say a thought game inspired by Tetris. It can be played alone or with two players on one computer. In this case, the screen is divided in two parts, each one is the playground of a gamer. Kind of corpuscules are descending in groups of two , and you must sort out them by group of 4 of the same color. Move and turn them round.

FooBillard is a magnificent Billard game based upon OpenGL. The Windows port only exist for an old version.
The games available are the 8 ball, the 9 ball , the snooker and the Carambol.

Funracing is a 2D car race in an above view inspired from Burning Metal 2D by EyeOne and realised in C language by Clément S. with the SDL library.
The aim is simple : just finish at the first place in each circuit. You can play with up to 4 players with bots. What is interesting is to play several, collisions and the possibility to play with bots. (source official web site)
Unfortunately, here is a game made by a francophone guy, but not translated in french.

GI-117 is placed in the category of arcade type air fight simulator.
Gl-117 let you take the commands of a fighter (several model available) to realise :
* simple flights
* deathmatchs alone or with a team , (with missiles or simply the machine gun)
* an attack/defense mod
* a defense mod against successive waves of enemy
* campaigns.
It is playable with keyboard, mouse or joystick.
The amateurs of spectacular simulators will be disappointed. But, here is not the performance, look once at the archive size : it is less than 16Mo . Graphics and sound effects are simple but not so bad, and the sound track is nice. For an amateur of simulation it is a game to try, for the others, it is also a game to be discovered! (source Framasoft)

Open Alchemist is a Tetris-like game inspired from a flash game of Motion-Twin. The rule is simple, it consist of gathering together 3 same elements in order to mute to the next one in a list of 12 elements.(source jeuxlibres.net)
Description on jeuxlibres.net

Pengupop is a small arcade game with simple rules, on a similar concept of the linuxian well known game, Frozen Bubble, itself inspired from Puzzle Bobble (Taito 1994 , also called Bust-a-Move in the occident). The aim of the game is to make the balls fall down with a ball gun.
When 3 balls are gathered, all the balls that are stuck on them fall down also. Unlike Frozen Bubble, the playground does not go down gradually. 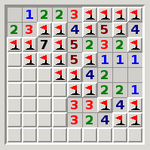 PortablePuzzles is a set of puzzle games like the well known minesweep.
This compilation, gathered by Simon Taham, contains 27 small games. MIT Licence. These games are Windows 98SE compatible.

The official web site in english

The sudoku is a grid game defined in 1979 by Howard Garns(USA), but inspired by the Latin square, and also from the problem of the 36 officers of the Swiss mathematician Leonhard Euler.
The Sudoku game has a grid of de 9×9 squares containing 9 grids of 3×3 squares. You have to place the figures 1 to 9 in each square, but , each figure can only appear once in each of the 9 grid of 3×3. And it can appear only once in each line and column.
The name sudoku comes from the abbreviation of the japanese game rules « Su-ji wa dokushin ni kagiru » , which means « it can only be one unique figure » (by square and by line). This abbreviation is associated to the letters Su- figure and Doku unique. In Japan, Nikoli is still the owner of the sudoku name; his competitors use an other name : they can call it by the original american name « Number Place » , or also by the word « Nampure », shorter. Some no japanese editors write it « Su Doku ».(source Wikipedia)

A space ship, a tors (a twisted tube...), weapons, enemies and above all speeeeeed ! This game under BSD licence has been written in the D language by the Japanese Kenta Chô and uses the SDL library. Once again a beautiful work for a few Mega octets. Port under Linux realised by Evil Mr Henry.

Submitted at the 7th Independant Game Festival (IGF) by its author Jason Rohrer, this game looks like nothing known : you pilot a kind of ship called the ‘Glyph’ which tries to eliminate the enemy ships , the ‘Anti-Glyph’ and above all the ‘Great Anti-Glyph’. In order to do that, your ship will have to increase its shooting power by gathering ‘Eléments' in the center of the playground. In the first level, these are some small plants that grow into flowers. Obviously, the enemies (the Anti-Glyphs) will try to prevent you to win.
It is one of the rare 2D game (the only one ?) to produce stereophonic sound effects according to the game state. The only game to have a similarity with this one is Cultivation (normal, it is from the same author).
An amazing game, beautiful, and even psychedelic to be tried absolutely.

Yoda Soccer was inspired from Sensible Word Of Soccer (SWOS) a 2D soccer game from the 90’ that was originally on Amiga. The version for PC was out in November 1995. Yoda Soccer has been developped in the Blitzmax language (www.blitzmax.com ).


It is more over a soccer manager game , where the realism has less importance than the management strategy. So, Yoda Soccer is more like the games Kick Off 1 or 2 from our youth than a recent 3D soccer game. The keyboard is settable for the two players, because Yoda Soccer allow to play alone against the computer but also one to one against a friend. To play the game, you will have to fill a data base. For that, an editor exist allowing to create its own soccer players. (source official web site and jeuxlibres.net)
The game is available on Windows, Mac OS as well as GNU/Linux and is multilingual.

Licence : The home GUI and the web pages of the compilation are under the GPL licence. And all the games are under free software licence libre or so.
Restrictions : Many tests have been made, however, the sofware included are provided without warranty. We can not assure you that they will work especially under Vista, Seven, Windows 98 et 95. Tests performed under Windows 2000 and XP as well as Ubuntu 10.04 with Wine 1.1.42 on machines build in 2003 and former. 3D graphic rendering needed.